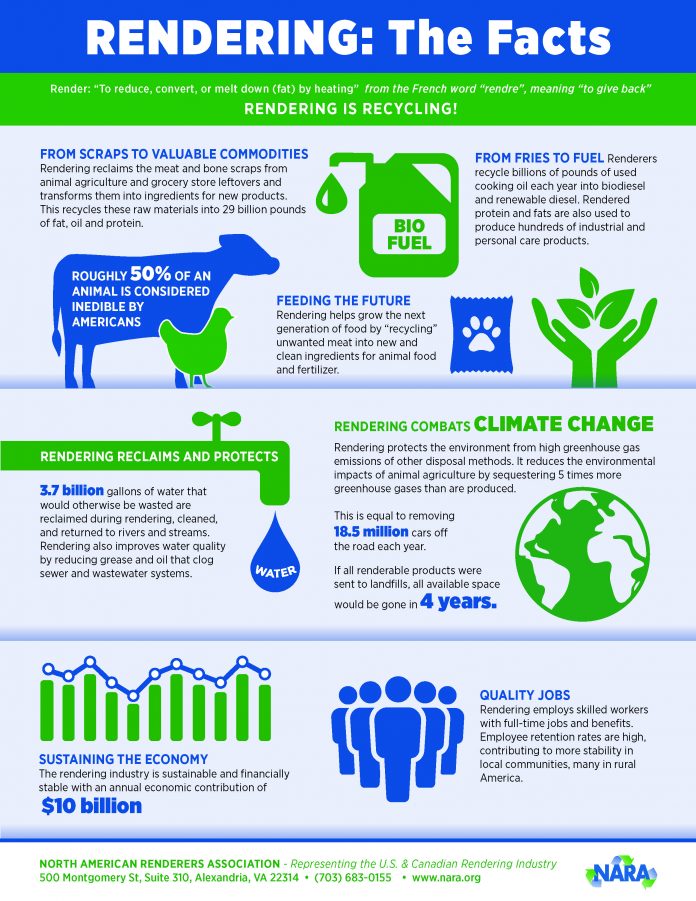 If you walk up to a stranger on the street and ask a random person what rendering is, you’ll probably get one of a few responses – ‘architectural or artistic rendering’ or ‘digital graphics rendering’, and for those wanting to get fancy, they might say it means to represent something in an artistic work (as in; ‘The sketch was rendered in charcoal’).

But the responses you’ll barely ever get are ‘A highly sustainable and climate smart practice utilised in agriculture industry,’ and ‘The original recycling’– yet both of these descriptions are 100 percent correct. in fact, those last two are also the most sustainable, I might add.

The exception being if you’re rendering your sculpture out of recyclable material, in which case kudos; but unless you’re using billions of pounds of otherwise wasted material for that (rather large) sculpture, let’s talk about agricultural rendering – or as I like to call it: the unsung hero of sustainability.

What is rendering?
For clarity, agricultural rendering will be referred to as ‘rendering’ throughout this article. In short: rendering is recycling. Roughly 50 percent of an animal is considered inedible by North Americans. This leaves a lot of leftover material (i.e., ‘the meat we don’t eat’) that would end up as food waste were it not for rendering.

Rendering reclaims this otherwise wasted material (like protein, bone, fat etc.), as well as used cooking oil (UCO) from restaurants, and safely and hygienically processes it into rendered material for use in new products – so nothing is wasted.

This rendering process transforms and upcycles what would have been food waste into safe, clean, and valuable ingredients for countless new goods – saving landfill space, and recycling 99 percent of this unwanted material. These rendered ingredients are then used in the sustainable production of new goods like safe and nutritious petfood and animal feed, household and industrial products, biofuels, renewable diesel, and many more common items that we use or come into contact with every day.

Rendering also helps customers and consumers feel confident they’re making a sustainable choice when they purchase items made with this upcycled rendered material. Additionally, by rendering these otherwise wasted parts of an animal, we demonstrate respect and resourcefulness for the livestock that were raised with care by farmers, and respect for the animal itself.

This is achieved by ensuring everything is used for a purpose – so no part of that animal goes to waste. This is of great ethical importance to me personally, and many others who choose to eat meat.

A brief history
The word render comes from the French verb rendre, meaning ‘to give back.’ This is an apt definition. ‘Rendering is Recycling’ isn’t just a catchy phrase – countless new goods are produced by using upcycled rendered material – so rendering really is (in the literal definition of the term) recycling.

Another motto commonly used in our industry is that renderers are ‘The Original Recyclers,’ and this is not hyperbole – rendering has existed for centuries and is one of the oldest ‘recycling’ practices.

At its start, rendering was used primarily for soap and candle making, mostly done in a kettle over an open fire. Further developments to the process in the 19th century enabled family-owned renderers and packers to produce both edible and inedible products.

Though the rendering industry continued on steadily (and quietly) for years to come, one example of the power of rendering’s sustainability can be seen during times of war. An example of this is the American Fat salvage.

During World War II, American housewives were urged to save and turn in their used cooking grease so it could be utilised by US Armed Services to produce explosives for the war effort. During that time, they saved and turned in nearly 700 million pounds of fat. In 1947 alone, household recovery exceeded 114 million pounds – that’s almost 10 million pounds a month.

Why it is so sustainable
According to data published in 2020, more than 62 billion pounds of raw materials are produced in the US and Canada annually. Rendering that material produces approximately 31.4 billion pounds of rendered products each year and keeps it out of landfills.

As many know, landfill space is precious, so rendering this material instead of throwing it away extends the lifespan of the space we do have. In fact, were it not for rendering, and that material was instead treated as waste – all available landfill space would be full in approximately four years.

In addition to the reduction of food waste and saved landfill space, renderers actually feed and grow the next generation of food by ‘recycling’ that unwanted meat and using the rendered material for animal feed and fertiliser. This act of recycling is, in its truest form, quite literally perpetuating the agricultural ‘circle of life.’

Rendering also helps to minimise and offset the environmental impacts of animal agriculture – shrinking our food production footprint. Rendering reduces greenhouse gas (GHG) emissions by 72% and fossil fuel use by 80% (when compared to petroleum diesel) and avoids at least 90% of the potential GHG emissions compared with industrial composting. In other words, rendering is the GHG reduction equivalent of removing 18.5 million cars off the road each year.

Another little-known fact about rendering is it recovers and returns valuable water that would otherwise be wasted or contaminated. Billions of gallons of water are reclaimed during the rendering process, which is then released back into the environment, returned as clean water to local rivers and streams; and that water meets or exceeds federal, state, and local safety standards when it is returned.

Renderers helps improve existing water quality too, without their pickup of UCO and cooking grease from restaurants, that material might end up down the drain. Rendering it instead saves municipal sewer and wastewater systems from becoming clogged.

This helps prevent fouled and contaminated water quality and saves millions of dollars in damage needing repairs from broken sewer lines and sewage back up.

Although rendering’s environmental sustainability benefits are widespread (that is the focus of this article after all), the economic and social benefits of rendering are truly behemoth and deserve recognition for their critical role of helping to support rendering’s overall sustainability.

Rendering is a financially sound and community-focused industry, and employee retention rates remain high as renderers offer career stability and a commitment to community support.

As mentioned above, the very act of rendering what would have been food waste and converting it into new products helps customers to be more sustainable, while also providing thousands of full-time, stable jobs that support families and local communities from coast to coast, in America and Canada, many in rural areas; and due to the raw and perishable nature of the material being rendered – these are local jobs that will stay local.

Renderers also contribute greatly to their neighbourhoods and wider communities, from supporting the local little league and fire department, to large-scale community outreach events to help feed and support those in need.

Renderers are deeply rooted in social sustainability and community support. And though many rendering plants are family owned and operated (and have been for generations), larger rendering companies remain dedicated to and passionate about providing community care and outreach.

Plant owners also invest considerably in improvements and enhancements to sustainability efforts, ensuring their facilities remain as climate smart and environmentally responsible as possible. And of course, with an annual contribution of $10 billion (as of 2020), the economic sustainability and financially solidity of the rendering industry directly supports the stability of careers, and ability to contribute so greatly to their communities.

The important balance and equality of the three pillars is that they all work together, building off each other.

The importance of education
Although education on rendering’s sustainability benefits has increased in recent years, there is a reason that all the possible answers from my earlier query covered every definition of rendering except agricultural – and that is due in part to the limited amount of rendering education that’s historically been available.

In a time when all three pillars of sustainability are increasingly more important to consumers and the public at large, the rendering industry is expanding their communication about just how important rendering is to the sustainability and reduced food waste conversation.

Through education, we can finally help to sing rendering’s praises for all its important sustainability benefits.

In an effort to increase this awareness and educate the public, NARA recently rebranded to highlight rendering’s sustainability benefits – from our mission statement to our tagline (‘Reclaiming Resources, Sustainably’). We launched a rendering podcast (aptly titled ‘The Invisible Industry’) and produced new educational infographics – the kind you could hand to that stranger on the street and help them easily understand why rendering is vital to sustainability.

NARA’s redesigned website is also consumer friendly, with resources that can be easily shared. Sustainability, like rendering, is not one dimensional or singular; it is multi-faceted and layered. Educating more people to understand why rendering is so critical to the reduced food waste and sustainability discussion is a valuable tool to gain support for overall sustainability goals. 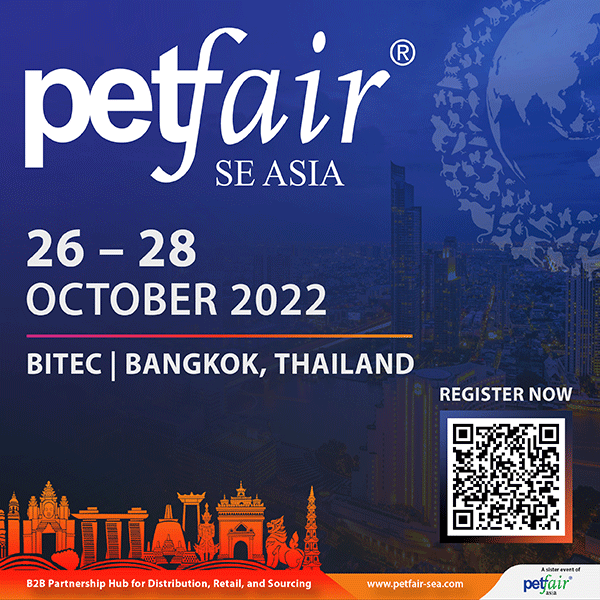